Secretary of Labor under Presidents Harding, Coolidge, and Hoover 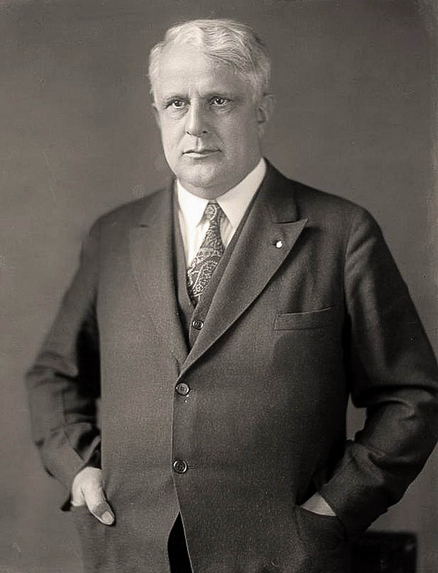 James J. Davis was born in Tredegar, South Wales in 1873. When he was 7 years old, his parents immigrated to the United States with him and his four siblings (a fifth would be born stateside). Davis’ father was a skilled laborer who worked with molten steel, a position known as a “puddler.” The family initially settled in Sharon but relocated to Allegheny when the mills in Sharon experienced shutdowns. When Davis was 11, he left both school and a newsboy job, hoping to find work in the mills. The foreman he spoke with turned him away for being too young but, on his way out, Davis noticed mill owner, Benjamin F. Jones, walking through the mill and approached him to ask for a job as a puddler’s helper. Jones agreed Davis was too young but hired him anyhow as two new furnaces were to be fired up the next morning and extra help would be needed. Davis went on to become one of the youngest journeyman puddlers, obtaining his rank at 16.

Davis’ political career started in Ellwood, Indiana, where he relocated to work in a tin mill. Known as “Puddler Jim,” Davis proved to be a popular man within the community of tin mill workers. He was a local official in the Amalgamated Association of Iron, Steel and Tin Workers of America when he threw his hat in the ring for the position of Ellwood City Clerk. The idea of an uneducated Welshman in such a position worried some Elwood residents and a newspaper editor in the town used his paper to speak against Davis. Displeased by the editor’s description of him as uncouth, Davis, in his own words, “took hold of his collar, and gave him a good licking.” This sort of campaigning sat well with the tinworking majority of Ellwood and Davis won by a decisive margin. He held the position of City Clerk for four years before being elected Record of Madison County, Indiana, holding this position until 1906.

1906 was an important year for Davis. He celebrated his 33rd birthday that year by joining The Loyal Order of Moose in Crawfordsville, Indiana. At the time of his induction, there were three surviving lodges of Moose and Davis was only the 247th member. Seeing an opportunity, Davis volunteered to be Supreme Organizer, a new position that would put him in charge of overseeing all aspects of membership, including increasing the rosters. To bring in new members, Davis instituted two significant changes: making sure the actual meeting places of the lodges were welcoming and making affordable health and accident insurance a benefit of membership. A Pittsburgh Press article about Davis from 1947 described the Moose Lodges after Davis’ updates as offering, “a new kind of saloon wherein weary men could play poker and discuss the affairs of mankind in a more genial atmosphere than obtained in regular barrooms, and where it would be possible, moreover, to enjoy a performance by a talented dancer now and then.” In offering to reorganize the Moose, Davis signed a contract with them that assured him $1 of each $3 initiation fee plus a $1 from the yearly dues of every member. Eventually, the contract would be amended so that Davis would only receive the $1 cut from the initiation fees but, as there were at that point over a million members, Davis did not register any complaints.

Working with fellow Moose and Director of Public Welfare for the State of Illinois, Rodney Brandon, Davis worked to expand not just the size of the Lodge but its scope of influence as well. Davis had always intended the increased Moose treasury to be put towards philanthropic ends and he is credited with coming up with the idea for The Mooseheart Institute, now known as the Mooseheart Child City and School. Founded to provide a school and home setting for the widows and children of Moose Lodge members, plans were set in motion for the founding of the Institute in 1911 and a tract of land was purchased outside of Chicago in 1912. Mooseheart opened in March of 1913 with 11 children taking up residence. In the 90 years since its’ founding, Mooseheart has provided both a home and schooling for over 11,000 children.

In 1921, President Harding appointed Davis Secretary of Labor. He would be reappointed by both President Coolidge and President Hoover and, as of 2012, he would be one of only three Cabinet officers in U.S. history to hold the same post under three consecutive Presidents. He resigned from his post as Secretary of Labor upon his election as State Senator of Pennsylvania in 1930. In 1931, Senator Davis cosponsored the Davis-Bacon Act.  Signed into law by President Herbert Hoover, the Bacon-Davis Act “established the requirement for paying prevailing wages on public works projects,” and requires that “all federal government construction contracts…must provide for paying workers on-site equal to the locally prevailing wages and benefits paid on similar projects.” [“Davis-Bacon Act Law and Legal Definition.” USLegal.com]

Lottery charges were brought against Senator Davis in 1932 by the Federal Government for the transportation of Moose Lodge lottery tickets over state lines. The 1932 trial ended in a mistrial and a 1933 retrial lasted close to four weeks. Davis was cleared of all charges despite the Government prosecutor’s labeling of him as “The Mussolini of the Moose.” Davis went on to serve as Pennsylvania State Senator until his defeat by Francis Myers in 1944.

He died of a heart attack at age 74 in 1947. A memorial service sponsored by the Moose drew over 1500 mourners, at least 300 of whom were high officials of the lodge. Eulogies for Davis were read into Congressional Record by six members of the House. Davis’ 1922 autobiography, The Iron Puddler; My Life in The Rolling Mills and What Came Of It, is available online through The Gutenberg Project.[/vc_column_text]